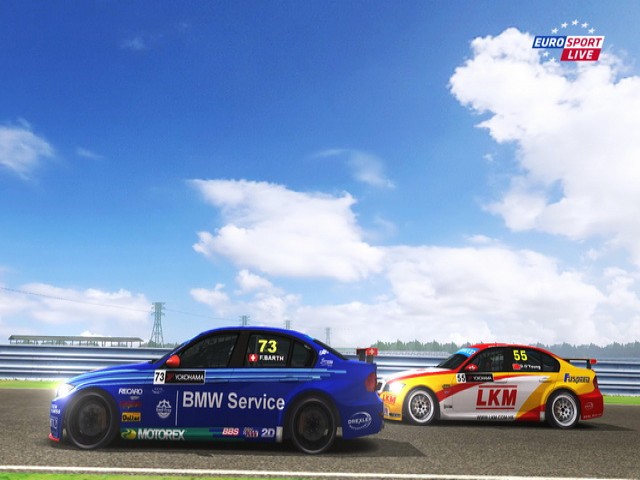 (Go to GameData/Teams and delete the WTCC_2012 folder before installing updated version of this mod. Everything else can be overwritten when prompted.)

Things you need to run the mod:

1. Race 07 from Simbin
2. WTCC 2011 mod from szekto (Adam Jonas) INSTALLED.
3. Funk's 2011 Coronel Rim update (http://www.nogripracing.com/details.php?filenr=35596) because we are using this update on ROAL cars.
4. WTCC 2010 expansion pack for tracks and BMWs
5. If you wish to use Ladas you need Race On for sounds, because Lada Priora is using sound files from it. (Lada Priora 2009 model, physics suited for 2013 season with replicas of 2013 skins, no Grantas in the mod)


Things to do before installing the mod:

This mod contains 2 full seasons with cars and tracks as well as championship files. The 2012 part of the mod was done by Tatino so I'll copy & paste his readme from his 2012 mod at the end of this readme.


ALL COPYRIGHTS BELONG TO THEIR OWNERS, I TAKE NO CREDIT FOR SOMEONE'S WORK!

(2012+2013)
- Adam Jonas (szekto) and others for some WTCC 2011 mod files I used for reference (like cars engines and physics), Chevy 2011 front bumper, BMW's and SEAT's sounds. He gave full permission to use, so many thanks to him.
- Fiasco for the great BMW's tail lights. Thanks for permission to use as well.
- fuNK! for permission to use corrected BMW's hood and front intake (in ver. 1.02 are included also his great ROAL's BMWs wheels, same as O'Young's car in 2013 season) and for warm and enthusiastic interest about this mod. (still working on some following updates for Chevrolet Cruze)
- Petra for Ford Focus + Honda Civic conversions (thanks to DANZ for original rFactor models too of course!). Many thanks also for the quick reply and permission to use, and for all her high level releases.
- Portoalto who made a great job with the tricky Honda wipers and patiently researched clues, infos and pictures about Fredy Barth's Shanghai livery in order to add the missing logo on the car's roof. Many thanks for his precious help and work. Also for his nice personality and his patience.
- SIMBIN for giving us a lot of unresolved bugs (LOL), and a lot of cars and tracks too.
- zolibphc and Roland Szabo for making the 2013 skinpack used in 2013 part of this mod.
- guys from R-Modding FB page and specially Plett for making us Honda Civic skins and Lada Priora skins for the 2013 season.
- Denis Vorobjov for Lada Priora 2009 model used in the 2013 part of this mod.
- all the unknown (to me!) authors of the car liveries I used as base (2012 Season) (except for AON Ford Focus made by PetraGTC, Honda Civic made by me starting from PetraGTC unfinished one, Fredy Barth's and Alex MacDowall's cars skins made by me from scratch). They are taken from a couple of skins packs (founded googling around the web in search of a 2012 mod...) with no readme files, nor infos about the author/s, so in this case it's really impossible for me to ask for permission or even to credits the original authors: since I don't want to steal anything to anyone (or that someone could think so), please understand my pure intentions and apologize me, if someone will recognize his own texture/s or parts of them I will be glad to give all the right credits asap. Anyway all the textures were edited by me for various reasons, most of them in a heavy way (around 95% more or less), so please, accept my apologies again.

- Special thanks to Mr. Tatino from Mysho for all his hard work, cooperation, his time spent on this project, his helpful personality and his patience with all the things needed while doing this mod. So publicly, thank you very much. Without you this would never happen.

About the 2013 part of the mod modded by Mysho:

This part contains all the cars as seen on 2013 events, using liveries from Zoli and Roland Szabo, slightly edited by Tatino for 2012 cars.

This part is using the same folder WTCC_2012 so don't be afraid you don't have the WTCC_2013 folder in your installation.


Things that might be coming to this mod in the future:


Everything else from the mod is basicly using 2012 Tatino's mod so here's his original readme:

First of all sorry for my bad english, I hope there are no misunderstandings at all.

This is my belated attempt to put together a proper mod about the WTCC 2012 season, not only a skinpack (at least I've worked hard for this purpose for about 200hrs in the last 2 months).
So this is NOT a pure and simple copy/paste collection of various stuff founded around the web - not at all. I've putted a lot of effort to make things working well (but please consider that I'm a "one man band" not professional modder with few knowledge and no skills at all, working on a 7 years old single cpu pc - shared with my younger brother btw - using old and poor programs and tools, so please be gentle before starting to blame me), editing around 70% of the files - more or less - for many reasons: some were simply wrong, other have issues, other were missing. I've made a lot of stuff from scratch as well, with my poor knowledge and lack of skills, as I've already wrote. Cars skins are all reworked - from 5% to 95%, depends on the textures - or made from scratch sometimes.

And now, after this necessary (and surely boring) introduction, some inner infos about the mod.

This is the car models included (please note that cars and class id are suited for my installation, if you have some conflicts with other mods in your install change them by yourself in the .inccar files):

Based on Simbin's BMWsi 2009 model, but with corrected hood and front air intake (textures corrections only) used for customers 1.6L turbo-charged engine (2011-2012-2013 seasons). Includes corrected lights as well (2010 - onwards). Engine and few physics changes made by me, based on 2011 mod specs.

Based on the well known 2008 TDi Simbin model, but with some adjustements (3d objects and textures), made by me to better represents the 2012 edition of the car (mainly wider rear window and facelifted rear lights). Surely not visually perfect, but working. Engine and few physics changes made by me.

Based on Simbin's WTCC10/STCC2 expansion packs model, with the corrected front grille already seen in 2011 mod, but with less reflections (on the grill, not all the car!), plus some other minor changes. Engine and few physics changes made by me, based on 2011 mod specs.

Based on original rFactor model made by DANZ, converted to Race 07 by PetraGTC. Very high level model and textures imho. I've changed something here and there, like new working lights (nothing special, but closer to real ones imho). New engine and few physics changes made by me as well. Official AON team textures made by PetraGTC.

Based on original rFactor model made by DANZ, converted to Race 07 by PetraGTC. Very high level model, unfortunately the 2012 real car was facelifted, so this one does not match perfectly the real counterpart, so consider this a sort of optional "bonus car", if you want to remove or skip it it's not a great issue imho (the car has only 3 championship's entries in the last 3 rounds with driver Tiago Monteiro). This car is much more important if someone will release a future 2013 mod, but surely I'm not the right person for doing an updated car model. Anyway, I've made new textures (based on PetraGTC ones) to resemble more to 2012 real car. Added working wipers (many thanks to Portoalto), updated the physics, made new engine (now the car seems fast and consistent as it should be), plus some other minor changes.

- before asking about the Lada Granta: sorry, no, there's no Lada Granta in this mod. This is due to various reasons. The most important is that atm there's no good, suited and usable WTCC 2012 Lada model, afaik. Moreover, Lada raced only a couple of events in 2012 (with great UK driver James Thompson) for testing and evaluation purposes. This car will be much more important for a future 2013 mod (is someone will made it), because is scheduled to entry all 2013 championship with 2 drivers.

Here are the available drivers, teams and cars:

In order to work correctly this mod requires Race 07 (obviously), plus WTCC 2010 Simbin's official expansion (sorry for this, otherwise I need to replicate too much original files), and the very good WTCC 2011 mod made by Adam Jonas (szekto) and others for BMW and SEAT sounds.
Extract mod folders from the archive, paste them into your race 07 installation folder, overwrite when prompted (but not a single existing file should be replaced). If for some reasons you have already a WTCC_2012 folder into your GameDataTeams path please remove or rename it before installing this one.

- Honda Civic wipers don't match real counterparts ones. Anyway, sometimes it's better to have something instead of nothing, as we use to say in Italy (solved in ver. 1.01).
- Fredy Barth car livery miss the logo on the blue part of the roof because I was unable to find usable infos or pictures about it (solved in ver. 1.01).
- There's no championship file due to the fact that some extra tracks are needed, but you can add them by yourself and make a proper WTCC_2012.bch file in GamedataChampionshipsOfficial folder.
- few others I forgot along the way (sorry).