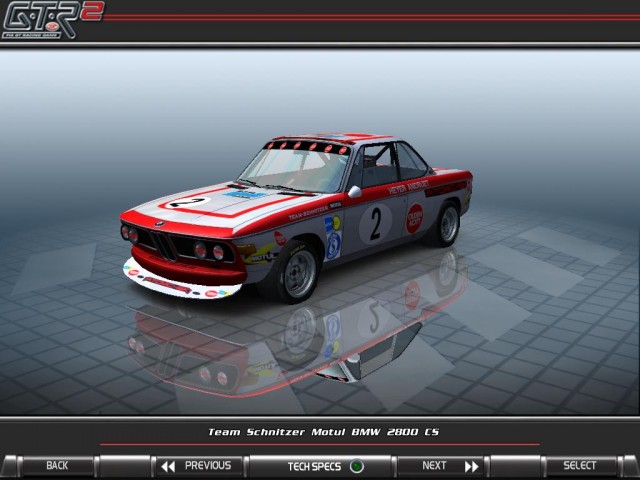 The 2800CS race cars never really could challenge the 2600 Capris for the title in the early Days of the 1970s Group 2 championship, while they had good power and a more sophisticated chassis they suffered from being over weight compared to the much lighter Capri 2600 a situation not rectified until the 2800CS was replaced by the CS Lightweight in 1973 more commonly referred to as simply the CSL.
The physics here are inspired by that final year of the 2800CS, 1972.
By 72 work had already been done to try to lighten the car as well as having the use of 3.0 engines and the 5-speed gearbox.
It is still some 400+ pounds heaver than the 2600 Capri and does not have the down force generating bodywork and rear wing, which would help the CSL win the championship the next year.
It does have a power advantage over the Capri, which helps off set the weight to some extent, and is more forgiving than its ford rival.
I have given the car the benefit of the doubt, and tried to keep it as close as possible to the performance of the Capri 2600 with out being faster, while staying as true as possible to the 1972 specifications.
The 2 cars are a blast to race with each other.
On larger tracks with fast sweeping corners the lighter weight of the Capri seems to give it an advantage.
Even with the extra 25hp of the BMW, the Capri will out pull it in the first 3 gears.
On tracks where there are multiple transition sections the more stable platform of the BMW gives an advantage, while the Capri is a bit nervous in these sections the BMW takes a set and holds its line nicely, any over steer is easy to control with a bit of opposite lock.

Thanks to Greg7 for permission to convert the GTL version to GTR2.

This has taken a bit of time because I needed to adjust all the GMT references so I could have low and hi res skins and a body mask.

Extract to your main GTR2 folder